WHAT IS THE PURPOSE OF COMPLEX NUMBERS IN REAL LIFE? 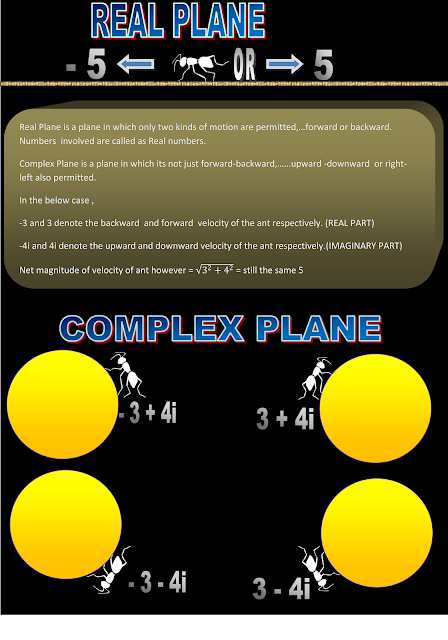 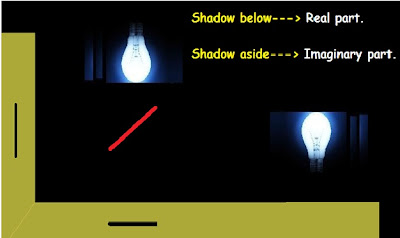 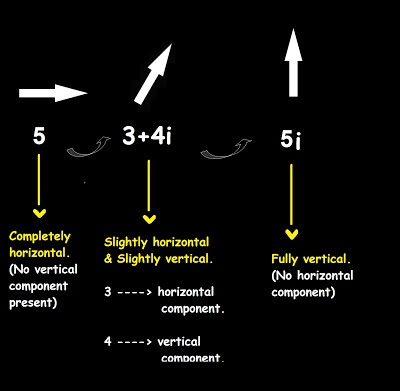 (/\) i denotes that the object is placed at an inclination of course.

(/\) So, what happens is, when an object gets inclined, it’s influence gets divided into two parts (components).
1) A horizontal component
2) A vertical component

WHERE ALL DO COMPLEX NUMBERS COME IN REAL DAILY LIFE ? AND IN OUR EQUATIONS?

(/\) Complex numbers come into our lives when one force gets divided into two branches of forces.

(/\) Inclining the object is just one example where the force will get divided into two.


CASE 1: THE STICK IS COMPLETELY HORIZONTAL 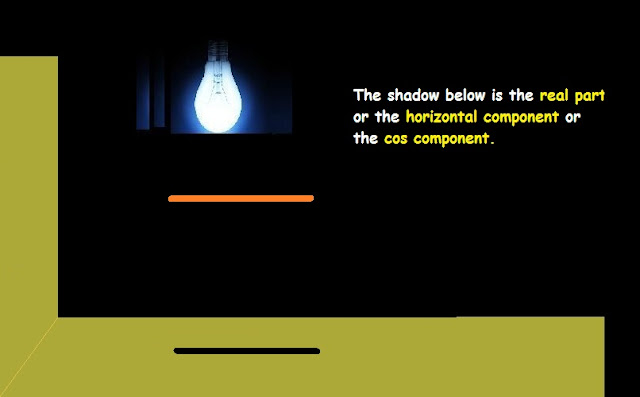 CASE 2: THE STICK IS SLANTING 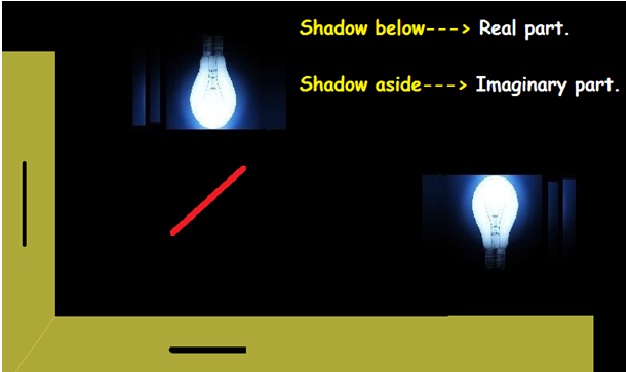 CASE 3: THE STICK IS COMPLETELY VERTICAL 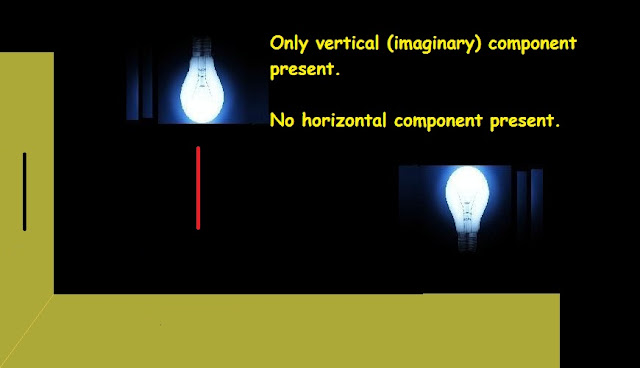 |||| Whenever one force gets divided to two components, its due to the force getting inclined or some other reason, the real and the imaginary parts come along.


(/\)The real part is the part which is usually parallel to the horizontal or to the base surface taken as a reference. For example in the above example, the ground is the base OR reference surface.


(/\) The real part is the horizontal influence (horizontal projection ).


USE OF COMPLEX NUMBERS TO INDICATE ROTATION. 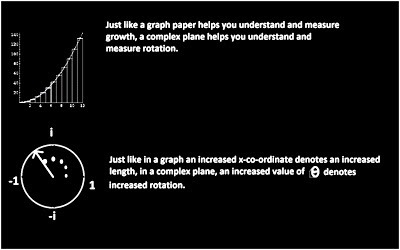 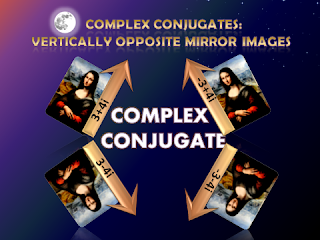 A VIDEO ON THIS.

AN ALTERNATE VIEW OF COMPLEX NUMBERS.GIVEN BELOW.

LINK GIVEN HERE YET ANOTHER WAY TO VIEW COMPLEX NUMBERS

LINK GIVEN HERE
A DIFFERENCE IN PERSPECTIVE AS GIVEN ON BETTEREXPLAINED.COM (/\) The above table given on better-explained.com give us a valuable insight on what was wrong with our traditional way of looking at things. Whenever we thought of complex numbers, we first imagined a number line, then we imagined taking square-root of a negative number, and going still backwards at the number line.  (/\) However, complex numbers are all about revolving around the number line. That is the reason why the numbers 1, i , -1 and -i keep repeating cyclically in complex numbers. Want an example? i^0=1 i^1=i i^2=-1 i^3=-i i^4=1 i^5=i ............and so on.  (/\) This kind of cyclical behaviour is seen only when things move round and round about a same location usually. They call it cyclical for a reason. 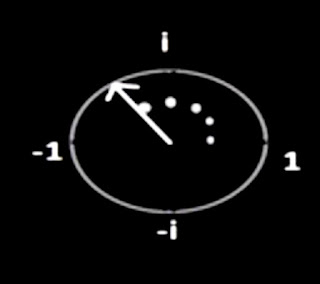 (/\) So this was the main problem with our imagination. We were seeing backwards whereas we were dealing with inclination and rotation and a cylical activity. (/\) You can compare 1,i,-1 and -i to the EAST-NORTH-WEST and SOUTH Poles in the same order in which they are written. (/\) If you stand facing the East and rotate 90 degree anticlockwise, you start facing North, you rotate another time by 90 degree from there, you start facing the west, and another 90 degree turn will make you face south and then again if you turn, you face east again.

A USEFUL VIDEO FROM BETTEREXPLAINED.COM

|||| Complex number indicate inclination almost always.
|||| Example 1
Imagine you opened a picture in microsoft paint.
Now lets say you rotated that image by 90 degrees. That is "i".
i = inclination by 90 degrees.
i * i = inclination by 180 degrees.
i*i*i = inclination by 270 degrees.
i*i*i*i= inclination by 360 degrees.
and so on.
Why is complex numbers a part of maths?
A normal number line can be used to denote an increase or a decrease in length or distance or area etc.
||||However, can such a line help you when the object has just been rotated or inclined at an angle?
|||| This where the complex plane comes into picture. It is used to measure how much you are inclining the object.
WHAT ABOUT NUMBERS LIKE 3+4i?
|||| Is it necessary that an object should be inclined by 90 degree or 180 degree or 270 degree sharp?
|||| Cant it be inclined at a lesser or an intermediate angle.
|||| If you take tan inverse of 3 + 4i, you will get the angle by which it is inclined.
|||| 3 is the view you will get if you stands upon the x-axis and look upwards towards the object (i.e the top view)
|||| 4 is the view one will get if climb up the Y-axis like climbing up a pole and then try to view that object (i.e 4 is the front view of the object)
|||| Now what is the actual length of the object?
|||| It can be found by sqrt(3*3 + 4 *4).
WHAT DOES THE COMPLEX PLANE LOOK LIKE?
|||| In many ways it looks like a map having NORTH, SOUTH and EAST, WEST arrows.
|||| The only difference : Instead of North-South, there is i and -i.
|||| And instead of East-West, there is 1 and -1.
|||| Now let's say that you are standing facing towards the East. This is like going towards i on a complex plane and so on.
|||| Comparing these two planes, we can say the following,
East ~ 1
North~ i
West ~ -1
South ~ -i.
THE SIGNIFICANCE OF THE NUMBER 1 IN MATHS.
|||| 1 is a number which denotes 'full' or 'complete' of anything.
|||| Just a 1/2 denotes 'half' of the full, 1/3 denotes 'one-third' of  the full, 1/4 denotes a 'quarter' of the full,......1 denotes 'full itself'.
|||| Similarly -1 denotes 'full' by inverted upside down. Imagine a machine in which objects when put come out with the original shape and size, but made to point in the opposite direction. '-1' in maths is another way to say, 'Size,Shape kept as it is, but direction inverted by 180 degree.
NOW WHAT ABOUT 'i'?
|||| Instead of seeing it as i, you may see it as 1i.
|||| i is a mathematical way of saying, "Size, shape, kept intact, but rotated by an angle of 90 degrees.
|||| - i is a mathematical way of saying, "Size,shape, kept intact, but rotated by an angle of 270 degrees.
COMPLEX CONJUGATES.
|||| 3+4i  is like an arrow pointing 3 degrees eastwards and 4 degrees Northwards.
|||| 3-4i is like an arrow pointing 3 degree eastwards, but now 4 degrees Southwards.
|||| To do this, you just have to rotate the first arrow by 90 degrees vertically downwards.
|||| So thus, a complex conjugate is nothing but an object rotated by 90 degree vertically (upwards or downwards).
WHAT IS THE SIGNIFICANCE OF THE i, j and the k planes?
|||| To understand this, all you have to do is ask yourself, "In how many different directions(planes actually) can I rotate any object in my hand?
|||| You will see that there are 3 planes in which this can be done.
1] You can rotate the object in a x-plane, or in a y-plane or a z-plane.
2] Just as we have x,y and z co-ordinates to pinpoint the magnitude of an object or force, we have the i,j and k co-ordinates in maths to pinpoint the direction of rotation of the object.
COMPLEX NUMBERS AND ITS TRUE SIGNIFICANCE AND APPLICATIONS.
|||| Complex numbers come in mathematics when a force gets divided into two branches due to its inclination. Want a example?
|||| Imagine a missile which strikes a ground initially at 90 degree. Let's say its force was 5 kN.
|||| Now imagine another case in which the missile hit the ground inclined manner.  Now the force of the missile gets branched into two components as follows
1] A vertical component which is calculated by 5sin(angle of incidence).
2] A horizontal component which is calculated by 5cos(angle of incidence).
So whenever a Full force gets divided into two or more forces due to rotation or inclination or such other phenomenon, complex numbers come into picture.
|||| To picturize the significance of complex numbers, just imagine a scenerio where complex numbers are not there. Instead of writing the component forces as 3+4i, say we write it as 3+4, now wont the reader feel that these two numbers have to be added and the result should be 7?
|||| That is where complex numbers come in. They warn us that the 3 and the 4 are not meant to be added together as we did in high school. That things are a bit, hmm what to say 'complex' in this case?
|||| One needs to understand that the net force of 5 got divided into two branches , a vertical branch of 4 and a horizontal branch of 3 due to an inclination of an angle of tan inverse of (4/3)....(whatever the answer....sorry, am a bit lazy to go to the calculator right now).

ABOUT THE i,j,k PLANES USED IN COMPLEX NUMBER

VENN DIAGRAM ABOUT THE PLACE OF COMPLEX NUMBERS 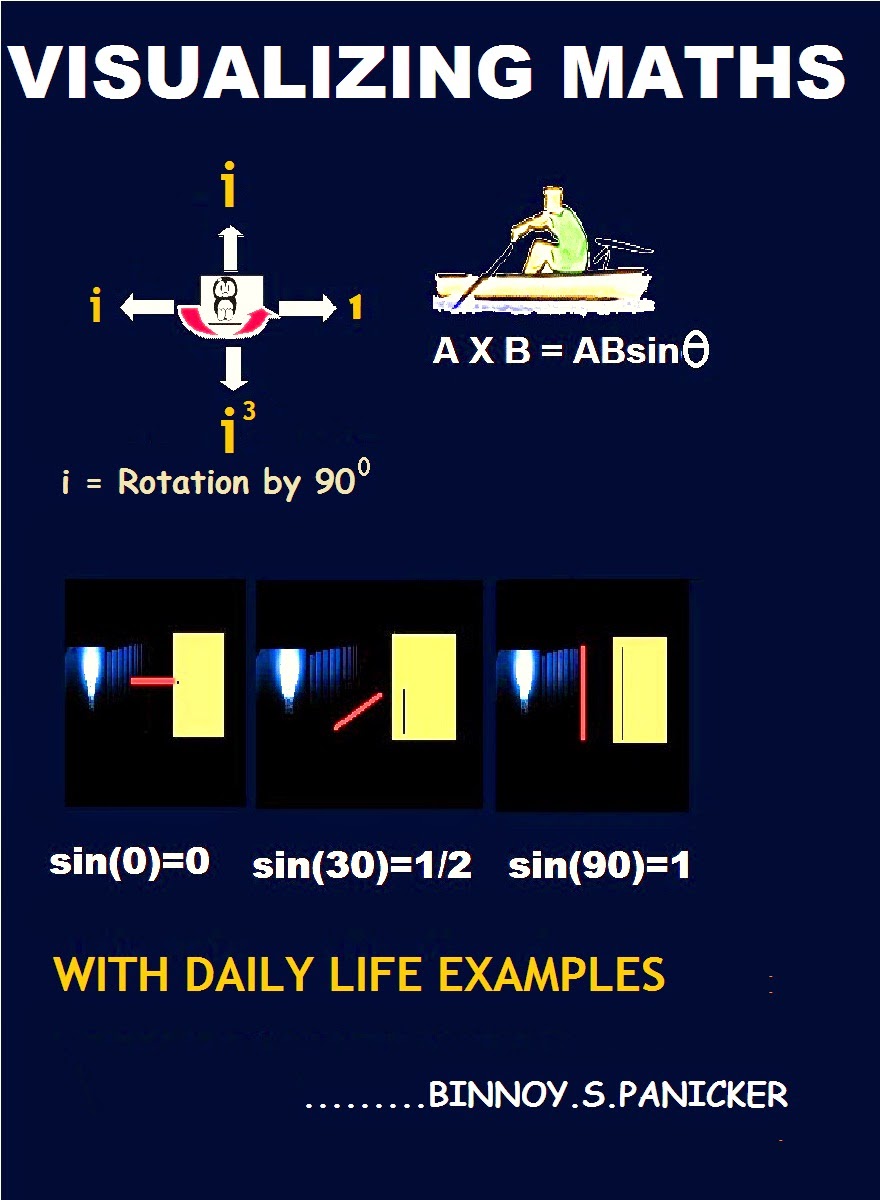 I hardly understood Math in school. In fact was on the verge of dropping the subject I loved the most because as much as I loved the theory of it, I could not understand the math involved in it.

However I loved the subject too much to be able to live without. Hopelessly, I was continuing my love-affair with it.
Then one day....a miracle happened,....while applying a certain formula again and again.....I came to know its significance. Slowly and steadily....other equations also started clicking. I got to see a strong relationship between Maths and the Physics it was pointing towards. They both were the same.

Every equation now had as if something to say. A burning urge to share these things with the world aflamed within me. So that no one has to give up the subject that he or she loves the most.

The book on visualizing maths thus got written as a sprout of inspiration. The blog followed. Both these are dedicated to you and all such similar minds searching for answers.